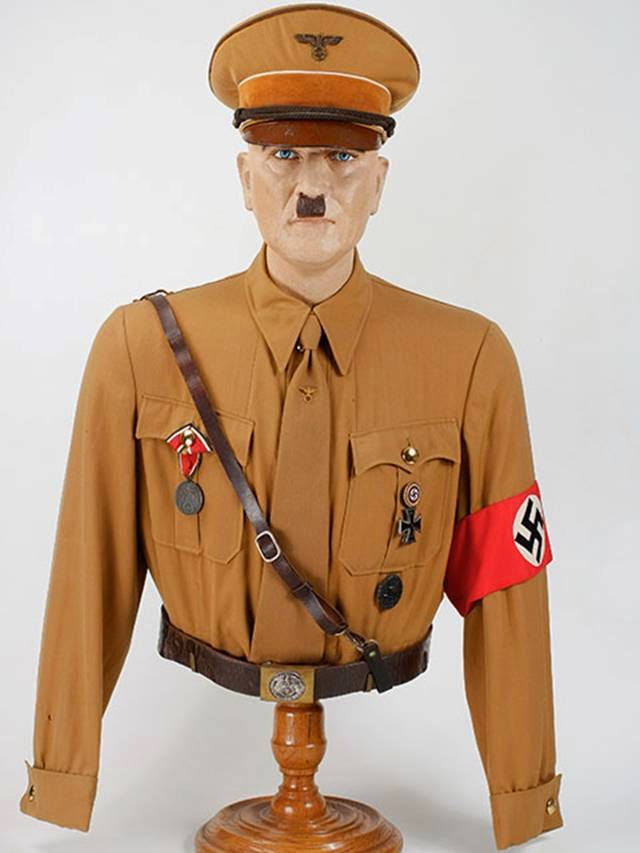 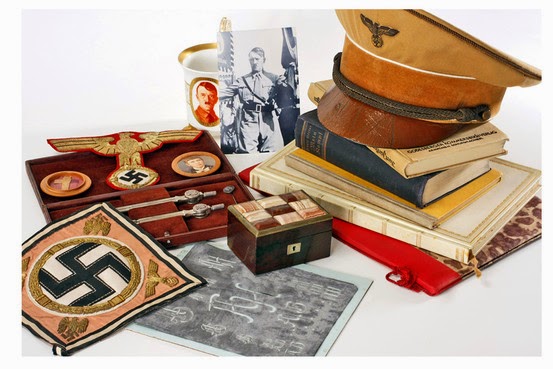 On 23.4.1945, Adolf Hitler ordered his adjutant and personal assistant SS-Obergruppenführer Julius Schaub to locate and destroy all of his personal effects and papers in Berlin, Munich and Berchtesgaden. A meticulous officer, General Schaub and his staff followed the Führer's order to the letter, as confirmed for example by Frau Annie Winter, the housekeeper who looked after Hitler's apartment in the Prinzregentenstrasse in Munich. Just for good measure, they drove up to the Berghof and destroyed everything they found there before motoring down through the mountains to Zell am See where they blew up Hitler's personal railway train. Some of Hitler's uniforms, clothing and personal effects survived and these are for the main part well-known and catalogued.

In September 1970, former US Army Lieutenant Benjamin Lieber, late of the 692nd Tank Destroyer Battalion, won a lawsuit against New York militaria dealer Mohawk Arms, securing the return of a collection of Hitler-related memorabilia said to have been stolen from Lieber by his chauffeur in 1968, who had apparently sold it to New York City militaria dealer Peter Hlinka, who had in turn sold it to Raymond Zyla of Mohawk Arms in Utica NY. Zyla and his lawyers claimed that Mr Lieber had no grounds for demanding its return as he "never obtained good and legal title" and the loot "properly [belonged] to the occupational military authority and/or the Bavarian Government". This defence had no legs under Louisiana State Law. 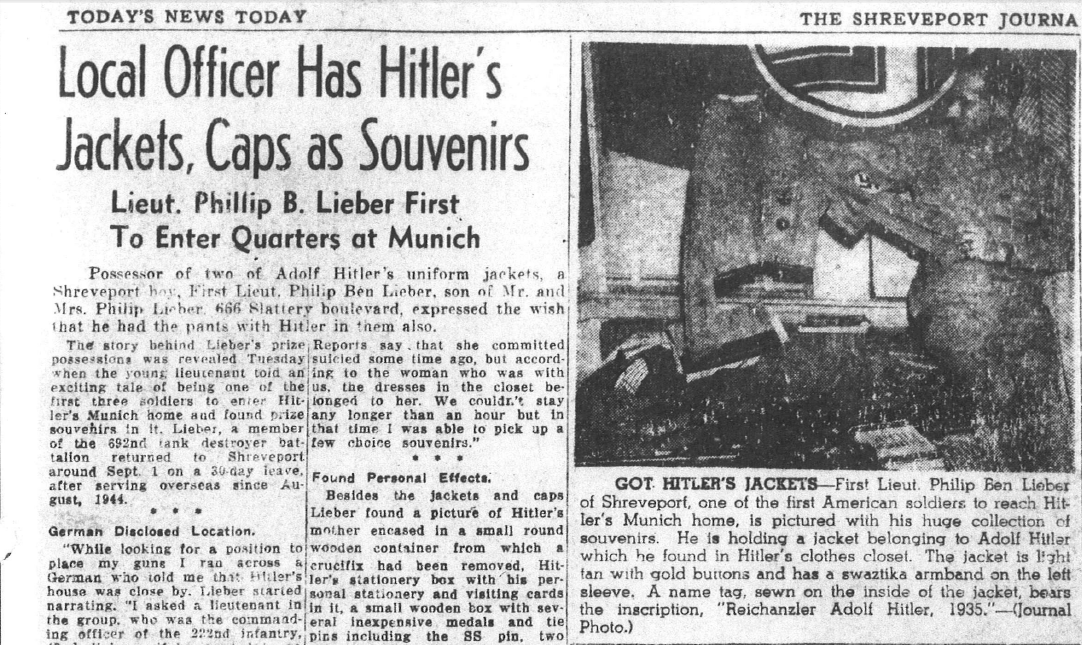 J. Robert Lynch Jr, the lawyer who represented  Ben Lieber in Louisiana, had told the court: "In 1945 the plaintiff, then in the United States Army, was among the first soldiers to occupy Munich, Germany. There he and some companions entered Adolph Hitler’s apartment and removed various items of his personal belongings. The plaintiff brought his share home to Louisiana. It included Hitler’s uniform jacket and cap and some of his decorations and personal jewellery. The plaintiff’s possession of these articles was publicly known. Louisiana newspapers published stories and pictures about the plaintiff’s collection and he was the subject of a feature story in the Louisiana State University Alumni News of October, 1945. There is some indication that the articles were occasionally displayed to the public." Before returning the collection, Raymond Zyla and his brother Joseph called on Lieber's New York lawyer Charles Drake and offered what Raymond Zyla described in a 1985 deposition as "a large amount of cash". The offer was accepted and the collection remained in Mohawk Arms' possession.

The above photograph dates from 1969 and shows one of the visor caps to which various related depositions and affidavits refer as having been stolen from Ben Lieber together with other items from his Adolf Hitler Collection. The other cap was described as a mouse-grey "stormtrooper" style cap. Although period newspaper articles refer to caps taken from Hitler's Munich apartment by Lieber, none of the accompanying photographs seem to show these caps. In other words, the earliest photographic evidence dates from the end of the 1960s, when the collection had already passed through the hands of dealers whose reputations for passing off fakes and forgeries are well-known to the point of causing merriment amongst collectors. By 1981, when the photograph below appeared in a magazine article, credited to Mohawk Arms, the cap had been somewhat straightened out.

The Ben Lieber Adolf Hitler Collection passed from Mohawk Arms to Wolfe-Hardin in September 1995 and was recently acquired by dealer Craig Gottlieb. A local San Diego newspaper reported: “According to a 50-page provenance document that came with the collection, the items were taken from Hitler’s home in Munich in 1945 by Lt. Ben Lieber of the U.S. Army. Over the years, the collection passed through the hands of several private collectors. Gottlieb said he had his eye on the collection for years, but it wasn’t for sale and, until recently, he didn’t have the money to buy it.

"Rather than keep the items for himself, he’s selling them to recoup his investment and make what he calls a small profit. He has already sold some of the smaller items to one collector, including a locket with a photo of Hitler’s mother, Hitler’s drafting tools, a shaving mug and a presentation box from the Hitler Youth. The item that has drawn the most interest is the early political visor, a brown uniform hat, that Gottlieb said he plans to sell for about $1 million.” The pre-1938 cap is of the type worn by Hitler and it might be authentic." 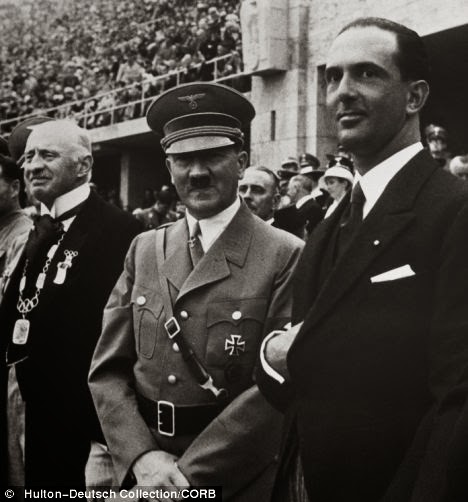 The fifty-page provenance is available here at the time of writing. It shows Hitler wearing his pre-1938 pattern visor cap in well-known various publicity and media shots like the one above, taken at the 1936 Berlin Olympics. Hitler's service uniforms were made by the foremost military tailors Wilhelm Holters, whose premises were on Berlin's Wilhelmstrasse, and whose work was second-to-none. The bullion-embroidered insignia found on Holters garments is of the highest quality. The party eagles adorning Hitler's visor caps were embroidered directly onto the crowns. 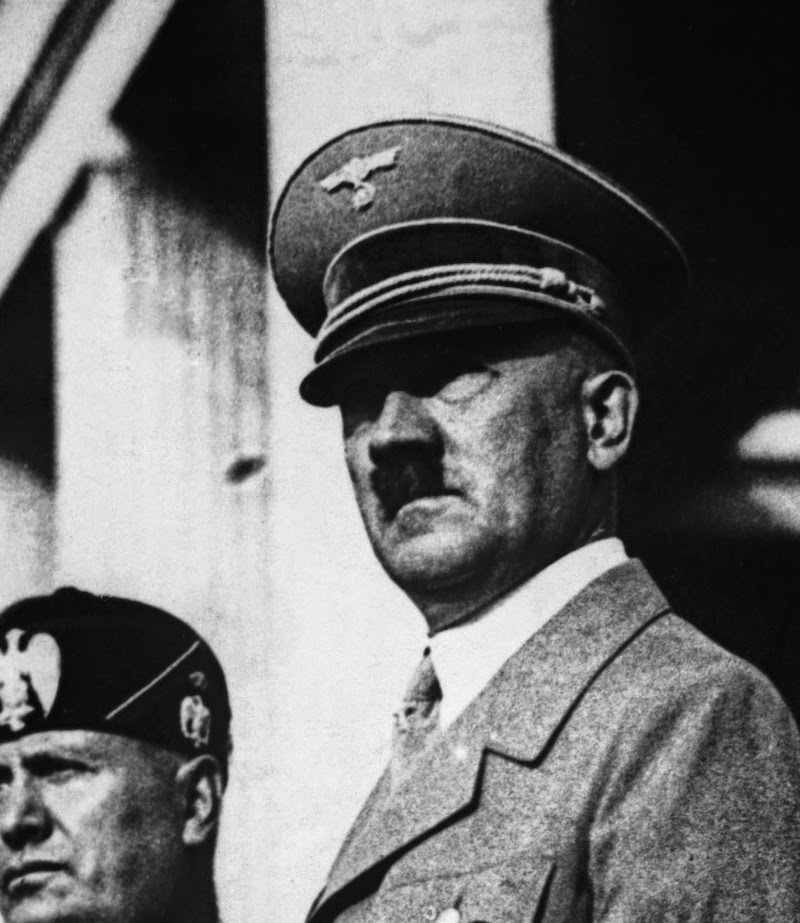 Photographed in Munich with Benito Mussolini in 1937, Hitler appears to the wearing the same visor hat as the one he wore at the Olympic games the previous year. This is not to suggest that the cap Benjamin Lieber said he found in the Prinzregentenstrasse apartment or in the Führer-Bau, depending on which version of the story one has read does not date from the 1935-1938 period when Hitler adopted a new pattern with a military-style cockade. Hitler's valets are known to have kept various formal outfits ready for him in various locations. However, the cap from the Ben Lieber Adolf Hitler Collection and the cap or caps of the same pattern seen in period photographs and footage from Berlin and Munich are not the same. This means that Holters either produced near-identical visor caps for the Reichskanzler in 1935 or that they had different artisans producing caps of different styles, like the cap from the Ben Lieber Adolf Hitler Collection. 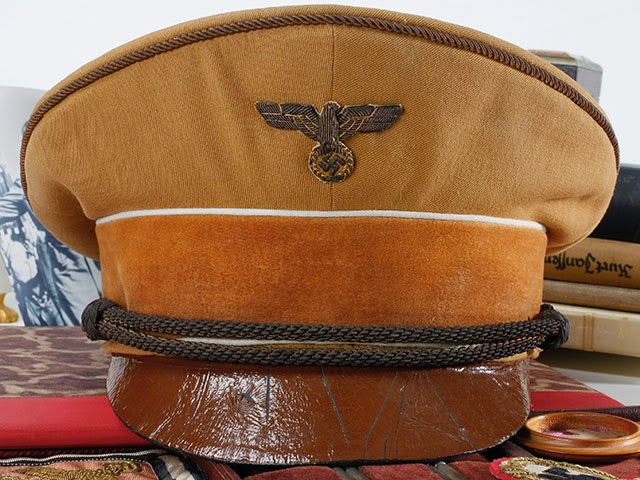 The two Hitler caps said to have been taken from the Führerbunker by the Red Army are similar to the Lieber Collection cap. 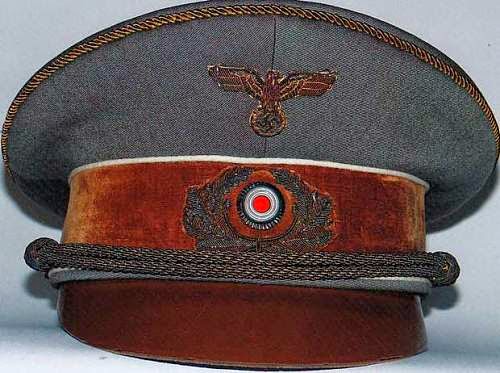 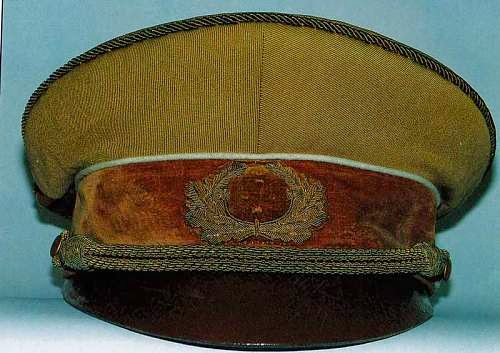 The field-grey military-style version contains a Holters label under the celluloid diamond as does the Lieber Collection cap. 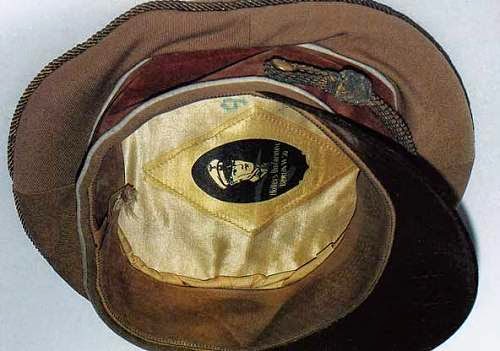 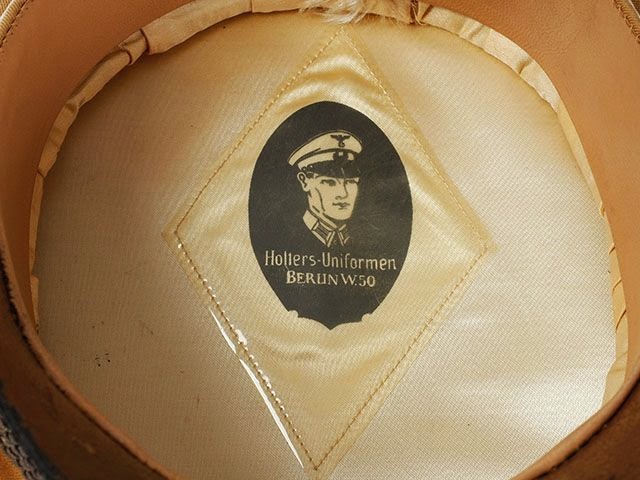 The interior and lining of the Lieber Collection cap show no signs of wear. As the San Diego Herald carefully noted, it is "of the type worn by Hitler and it might be authentic."

Comments are welcomed as long they are adult in nature. Abusive or threatening comments may not be published.